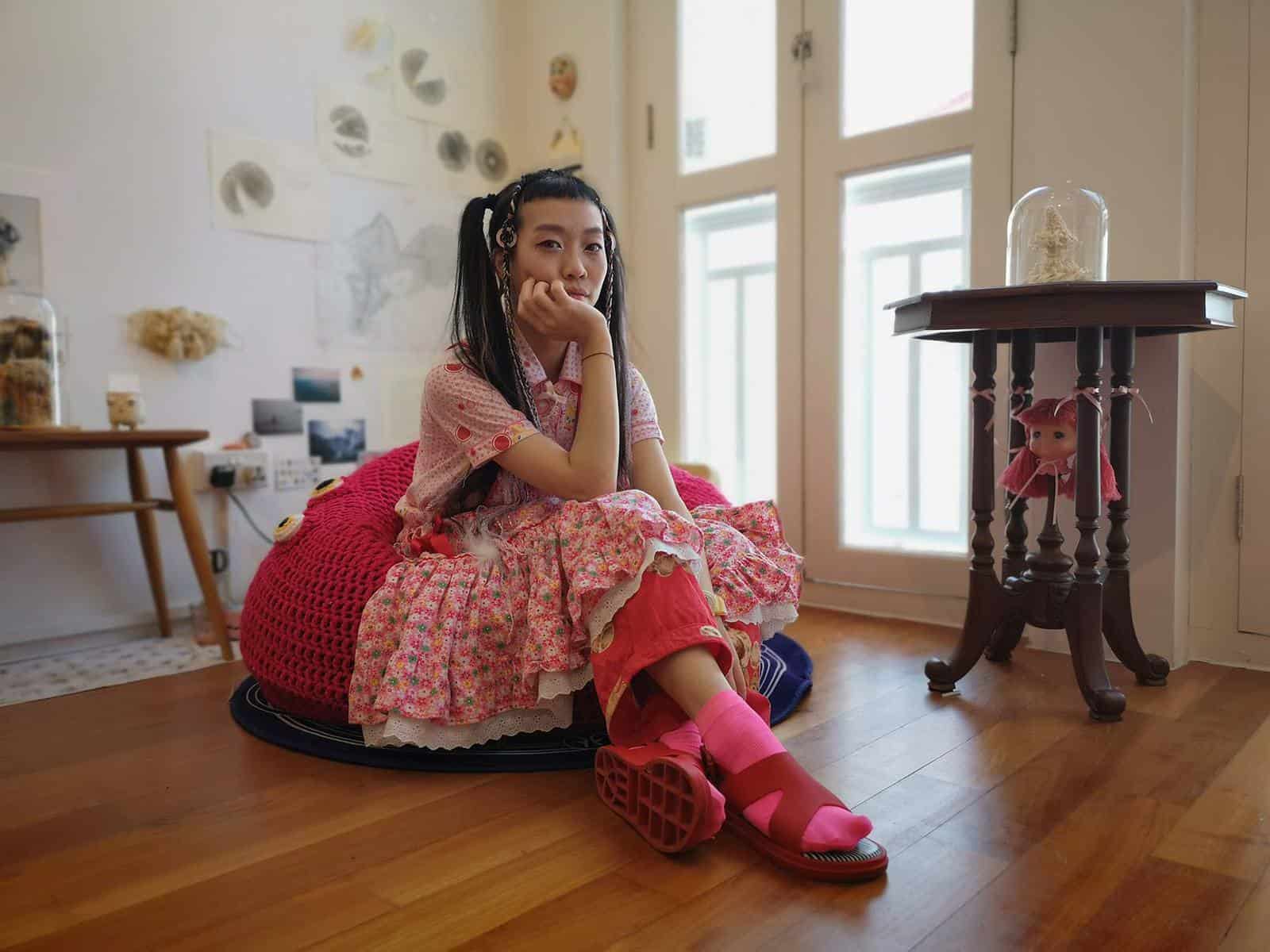 What if you were forced to do something enjoyable again and again? What would you still enjoy about it?

Perhaps this is a bit of a disturbing question, but it’s one that artist Kelly Limerick has been pondering lately as she plans for a site-specific installation at Cuturi Gallery as its latest represented artist and resident. This work-in-progress has her exploring the repetitive creation of formalistically perfect shapes – and then paradoxically destroying them in flames. 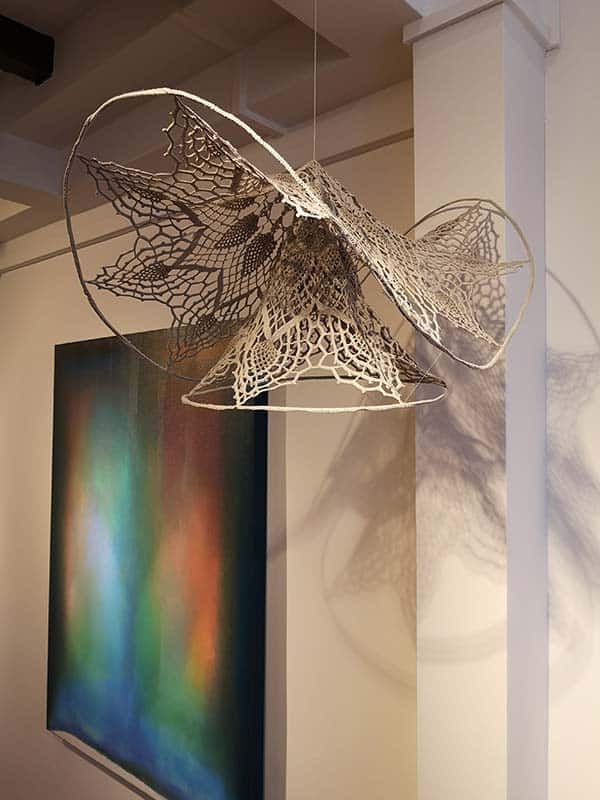 Kelly’s experimentations for her upcoming installation, which involves the repetitive creation and destruction of crochet’s Platonic form: the doily.

“Crochet is very enjoyable, especially doilies. But what if you were forced to do something enjoyable again and again? What would you still enjoy about it?” asks Kelly. “I want to know how it feels when I burn them ­– how it feels to spoil that very thing that you put so much effort into making perfect.”

The paradox of burning that which you created is accentuated by the fact that crochet is incredibly slow work – a single moment of destruction effectively undermines hours or even days of intricate labour. 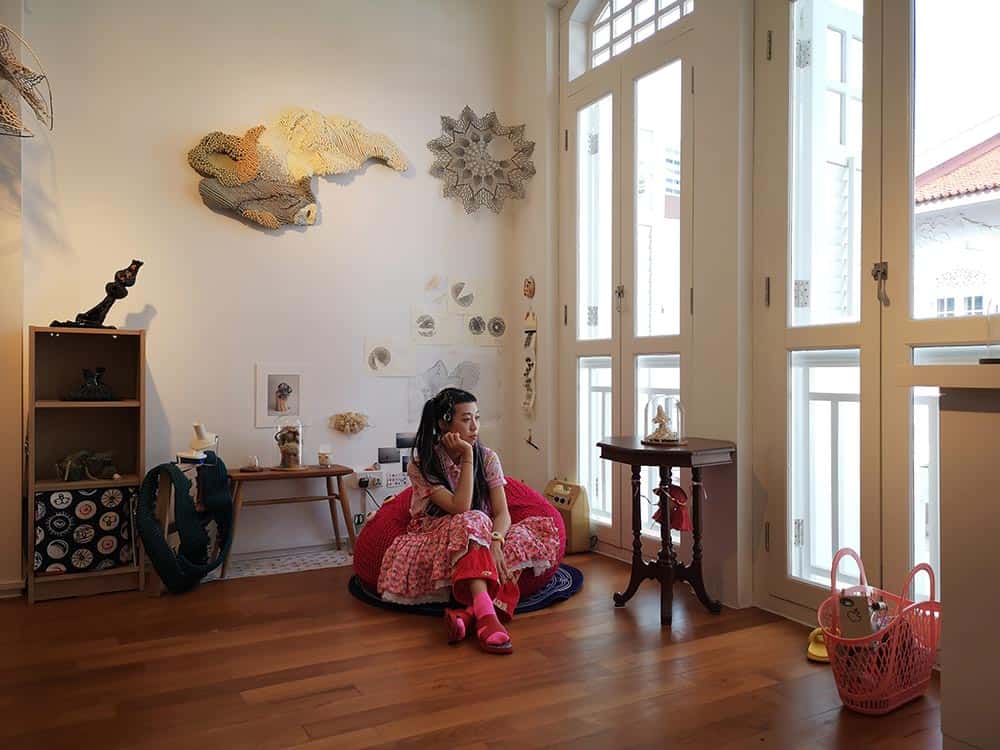 The brainchild of gallery owner Kevin Cuturi, the Cuturi Residency programme has launched the careers of artists such as Aisha Rosli, Faris Heizer, Marla Bendini and Shen Jiaqi since it began in October 2020. It is swiftly making a name for itself for the crew of young, hardworking and creative talent that it attracts despite being a mere year old. The most recent addition to the gallery’s roster is Kelly Limerick, whose sculptural and installation practice sets her apart from the stable of painters that gallery tends to work with.

A gesture of rebellion

The artist first began to explore this paradox in her series, Time is A Commodity (2021) as a gesture of rebellion against what she perceived to be the general public’s habits of valuing crocheted works solely according to the amount of time that it takes to make it. It all started when she realised that many people could only relate to her work by asking how long she spent to make it, as though its other characteristics – aesthetics, craftsmanship, concept – were secondary, or even unimportant concerns.

With this work, she asks, “Does the value of an object lie in the time that is spent on it? Or is value more than just a representation of time?”

As the melting of these works transmutes these reproducible craft objects into unique objects of art, it also invites people to consider the disparities in the ways that craft and art are perceived and valued. 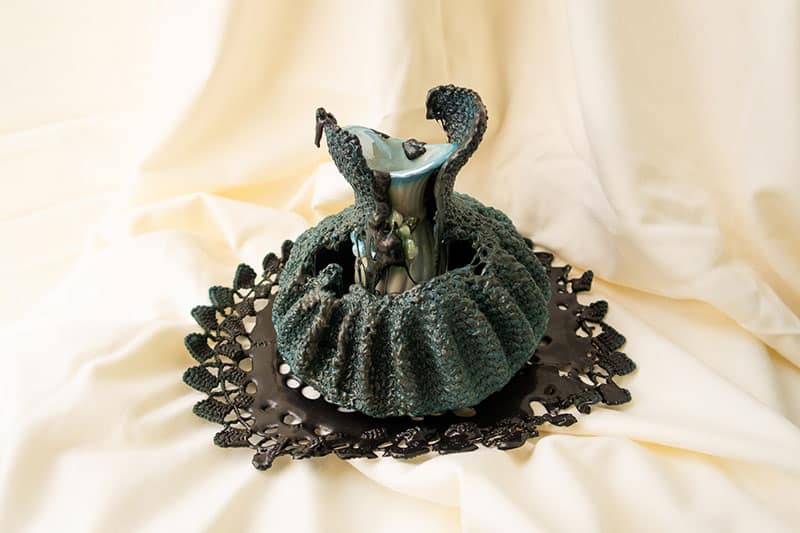 In Kelly’s Time is a Commodity (2021) series, each sculpture is crocheted to mimic the perfectly symmetrical forms of ceramic vases and doilies. The investment of time and effort in constructing each form exquisitely is upended by their subsequent destruction, while the seeming futility of the gesture captures the artist’s emotional reality at the time of its making. Image courtesy of Kelly Limerick.

“The spark to creating this work was actually very simple: I was just very pissed off,” says Kelly. “I couldn’t understand why nobody wanted my work even though I had been working so hard, over so many years, to create them. So in a fit of anger, I thought, since it’s worthless, I might as well burn all of it down. That was the kind of mood that I was in.”

A veteran of commissioned works

Kelly’s frustrations with the underappreciation of craft’s value is a refrain that echoes despite her various successes as an artist. A veteran of commissioned work from big brands such as Nike and Facebook as well as entities like the National Heritage Board and OH! Open House, it’s clear that there is some value accorded to her work – even if it is not by commercial consensus. 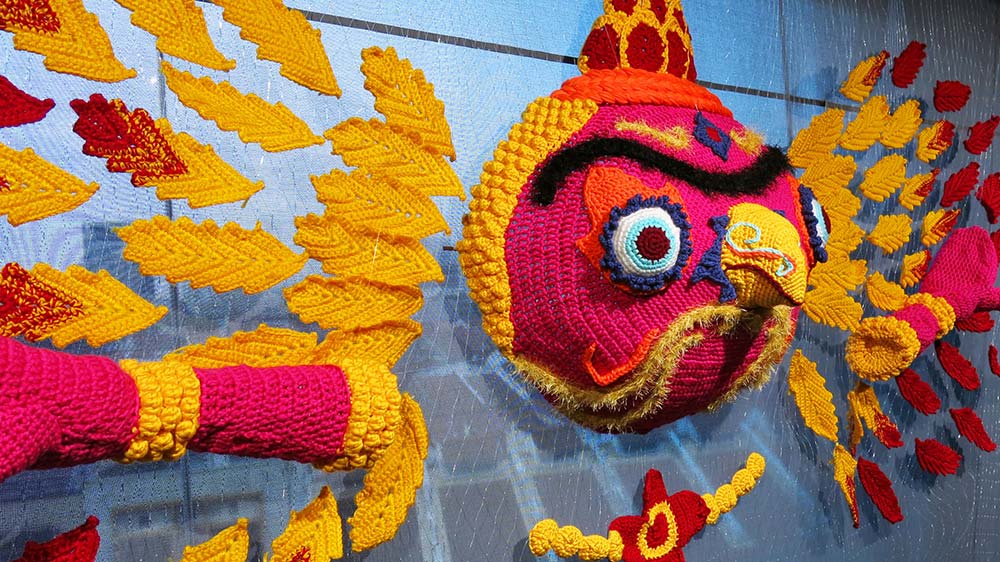 Detail shot from Unlikely Dwellers of the Urban (2017), a large-scale, multi-site yarn bomb installation that Kelly created at the Indian Heritage Centre, Malay Heritage Centre and Sun Yet Sen Nanyang Memorial Hall in partnership with the National Heritage Board. Image courtesy of Kelly Limerick.

Throughout the past few years, the artist has been working hard to establish a name for herself while simultaneously pushing the limits of her craft. The commissioned works have given her a confidence in working on large-scale public artworks in collaboration with small army of volunteers, such as her recent work for A Softer World produced by Art Encounters: 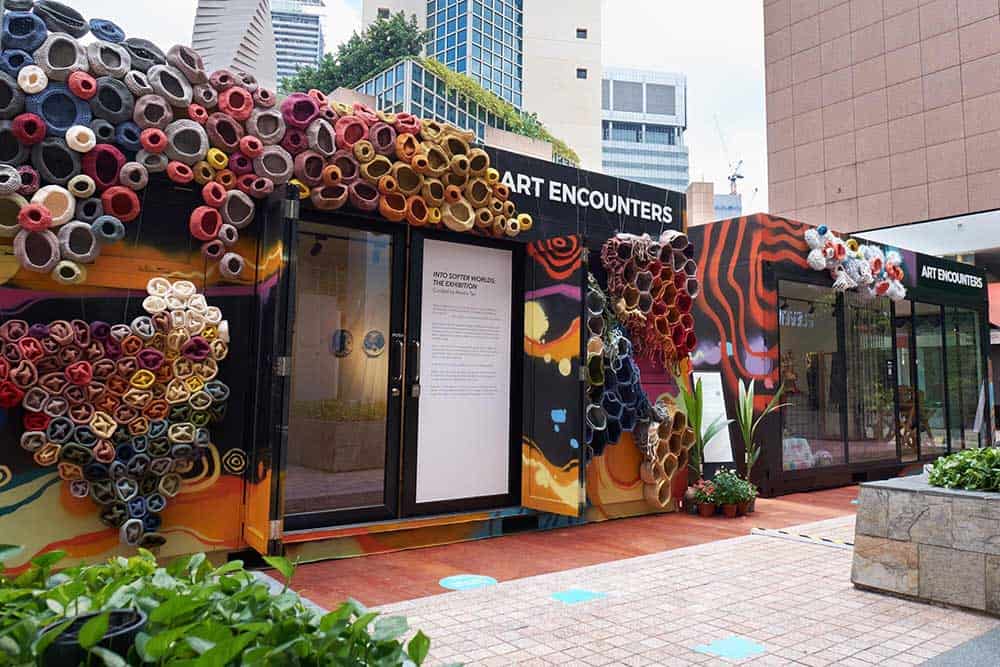 On the other hand, her sculptural works on a more intimate scale are where she challenges herself to scale new heights in technical proficiency: 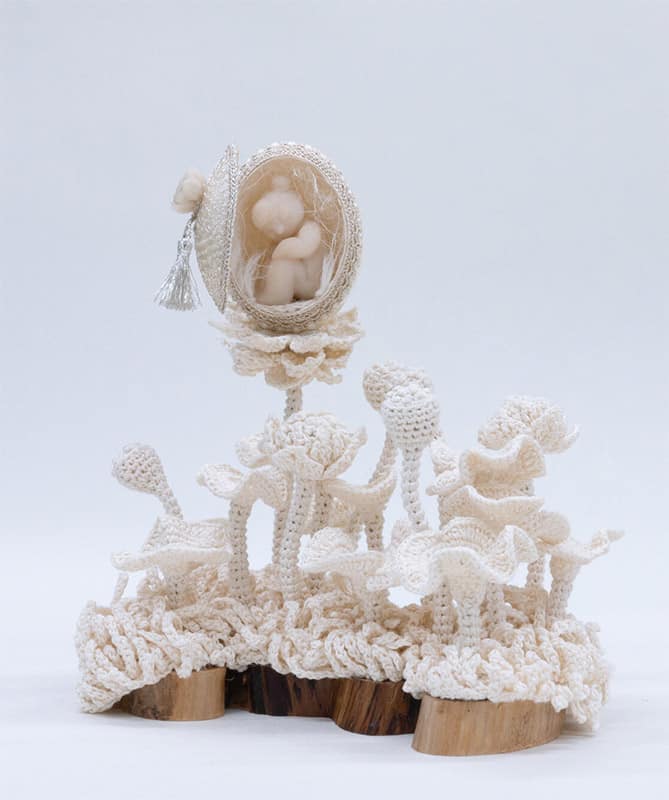 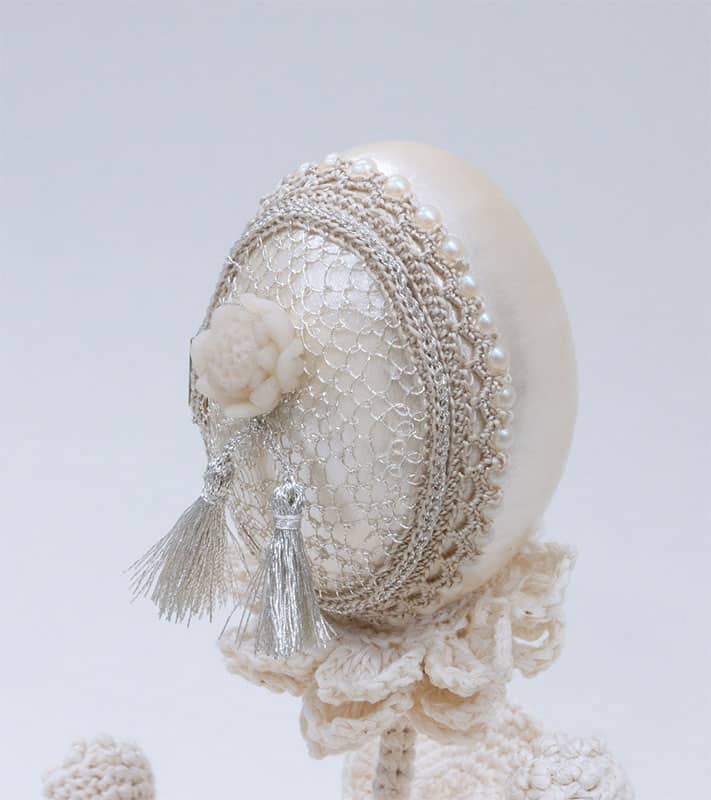 As the artist grows in both breadth and depth of her relationship toward her craft and how she expresses herself to the public through it, big shifts in her practice begin to show themselves. One such change is her increasing openness in experimenting with process-driven art, as embodied by Brother (2021), a work whose execution and concept is quite the landmark in Kelly’s recent oeuvre:

Brother (2021) is a large-scale performance piece in which Kelly knitted and painted on a blanket before dismantling it once more. It was commissioned and presented at Of Limits at Stamford Arts Centre. Video credit: Kelly Limerick and Eugene Lim.

With this work, Kelly channels destruction through her unravelling of the painted yarn, to speak to the way that migrant workers’ identities are erased and rendered illegible despite how their labour is woven into the very fabric of our society. It’s a work that possesses conceptual strength and aesthetic beauty. While the craftsmanship is not technically as ambitious as her other works, Brother taps on essential characteristics of her chosen craft to ruminate on labour, value, time and perhaps, futility.

In it, I glimpse a seismic shift in Kelly’s practice. The artist may have cut her teeth – and gained her fame – on the intricate fantastical, but now that she has mastered it, she is more than ready to conquer new ground.

“It can sound like shit, but what are you trying to tell people through it?”

She credits these developments to a perspective that a friend had opened her eyes to, during a lesson on making music through creative coding.

“I told my friend Chris, who was teaching the class, that I’m completely not musical and I was afraid that what I created was going to sound terrible. He said, if that’s the case, so be it – in this day and age, all the most beautiful music has already been composed. For a class that lasts two months, there was no way that I could be any better than the classically trained professionals out there.”

Away from the beaten path, into a derelict wilderness

Other developments in her practice are subtler, but nonetheless as important. During the Circuit Breaker last year, Kelly began to delve into incorporating different materials and yarn fibres into her works. This, along with the artist’s penchant for narrative-building, resulted in the birth of her 魂 (tamashii or spirit) series.

In this series, she sought to capture the abstract essence of broken found objects by imagining the beings that inhabited them. It’s a concept that takes inspiration from the Shinto belief that supernatural entities reside in non-living objects – which escape when the object is broken.