Singaporean artist Vanessa Liem expresses her concerns towards society through her Surrealism paintings, creating a world for others to connect with.

The scent of cedar wood from the canvas frames filled the still air around the studio, creating a warm and welcoming atmosphere. Yet, the feeling was almost unearthly; paintings of bald, exotic figures filled every corner of the room.

However, one could not stop gazing at the intriguing paintings. The disturbing feeling faded away as the paintings started to come to life, like they were expressing the familiarity of vulnerability and loneliness. 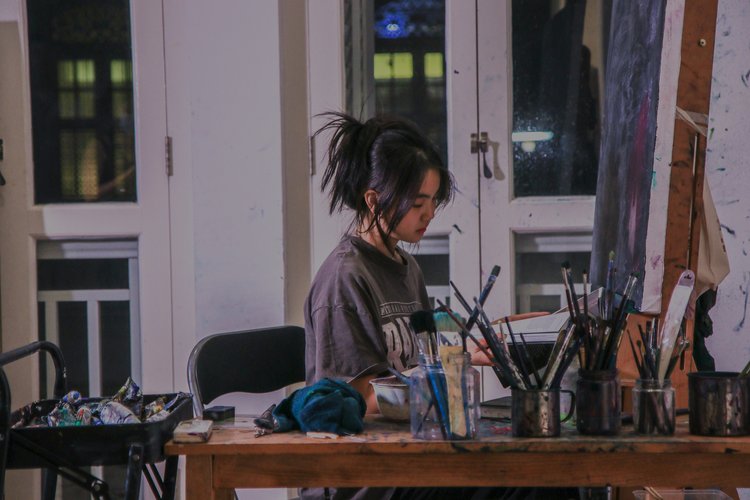 19-year-old Singapore-based artist, Vanessa Liem, brings issues faced in real life into an alternate reality through her surrealist oil paintings. Her paintings open up another world where people can connect, seek comfort, and know that they are not alone.

Growing up, Vanessa found herself caught up in a never-ending cycle of relationships with different people — good and bad.

Navigating through these relationships affected her mental health, triggering her to explore the topic of mental health in her artwork.

Vanessa wanted to overcome the barriers in addressing mental health by using paintings as her medium to share about her struggles with anxiety and escapism.

Building a connection with people through her paintings was her way of removing the stigma surrounding mental health by letting others know that they are not alone and that it is normal to be struggling and facing these issues.

“Mental health deserves to be openly communicated because it is fundamental to us as human beings. It is so common yet so individualistic,” said Vanessa.

“It could mean vulnerability, it could also mean strength. Nakedness does not necessarily have to suggest sexuality, and if it does, there’s nothing wrong with that too,” said Vanessa.

Vanessa also blends in the imperfections of bodies — fats, folds, and stretchmarks to the figures, embracing the flaws of the body. With these details, it amplifies the rawness in her works.

Growing into a New Style

After graduating from SOTA, Vanessa became interested in painting mannequin faces and dolls, which began her journey exploring surrealism. Soon, she found herself intertwined with her own works as she started using her face as a reference to create the faces of the figures on her paintings — a round face with almond eyes, and a button nose.

‘Race to the Moon’ is an art piece where Vanessa first started referencing herself in her paintings. The painting is about constantly needing to be on the go, to be at the top, and never deserving of rest.

It depicts three different figures representing various personas of Vanessa at a race.

“A race that is taken control by the red and blue figures while the figure in the middle acts as a helpless victim amongst this race of power, bearing a blank expression of acceptance,” said Vanessa. 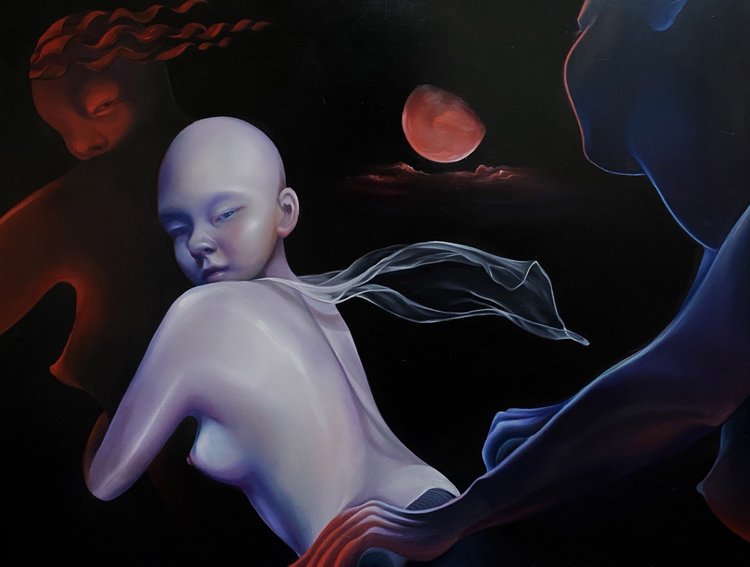 Race to the Moon

The Art of Expression

Art has always been the platform where Vanessa could express and share her thoughts and ideas openly.

‘Control Room’, a painting from her solo debut exhibition ‘I Cried Bizarre’, was inspired by the generational conflict Vanessa observed.

“In the painting, the baby represents youths and the blue leg represents the older generations. The umbilical cord connecting the two generations portrays both generations attempting to control each other,” said Vanessa of the piece.

Vanessa sees things beyond just one perspective and is always open to other interpretations. All she hopes for is to connect people together through her paintings, share experiences and spark discussions.

Currently a resident artist in Culturi Gallery, Vanessa is preparing for her upcoming solo exhibition, ‘For the time being’.

Subsequently, she will be pursuing an undergraduate degree in Fine Arts. Mark your calendars for June 18 and check out Vanessa Liem’s second solo exhibition at Culturi Gallery.