Water bodies in ‘For the Time Being’

Ants Chua, Art and Market, June 24, 2022
Open a larger version of the following image in a popup:
Share 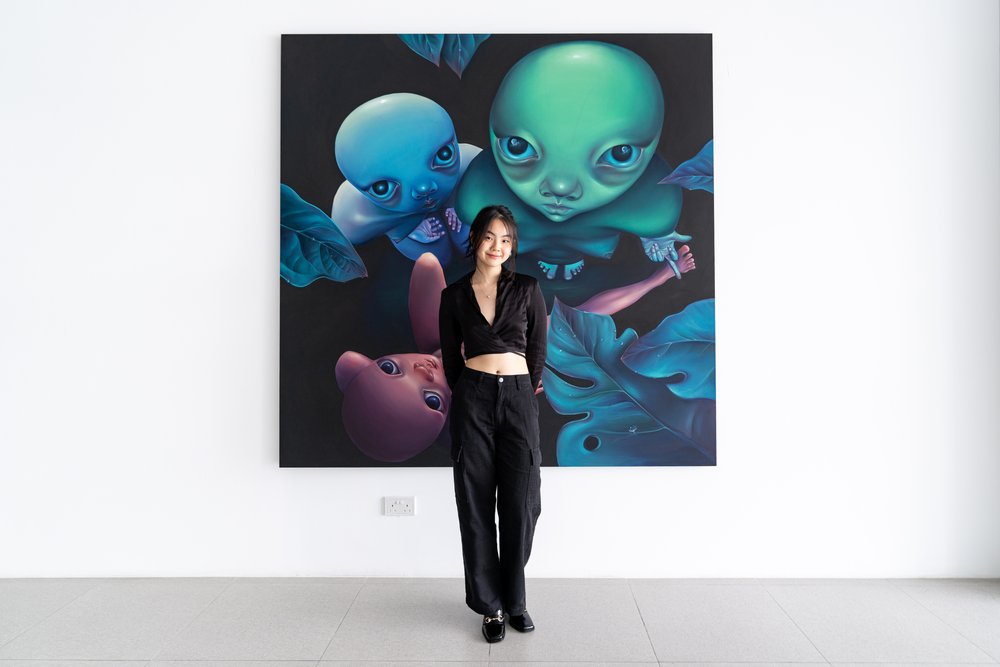 Vanessa Liem’s ‘For The Time Being’ is her second solo show at Cuturi Gallery, following ‘I Cried Bizarre’, Liem’s debut solo, in early 2021, featuring works such as ‘Kiss My - ’ (2021),‘She’s a Gone Case’ (2021) and ‘All But Henry’ (2021). Slender, blush pink mannequin figures in ‘I Cried Bizarre’ symbolised the hollowness of others’ perceptions, an interrogation of online identities from the perspective of a digital native. Liem’s surrealist style and preoccupation with humanoid figures carry through into her newer work, but the dark, cool tones of ‘For The Time Being’ signal a more interior excavation. 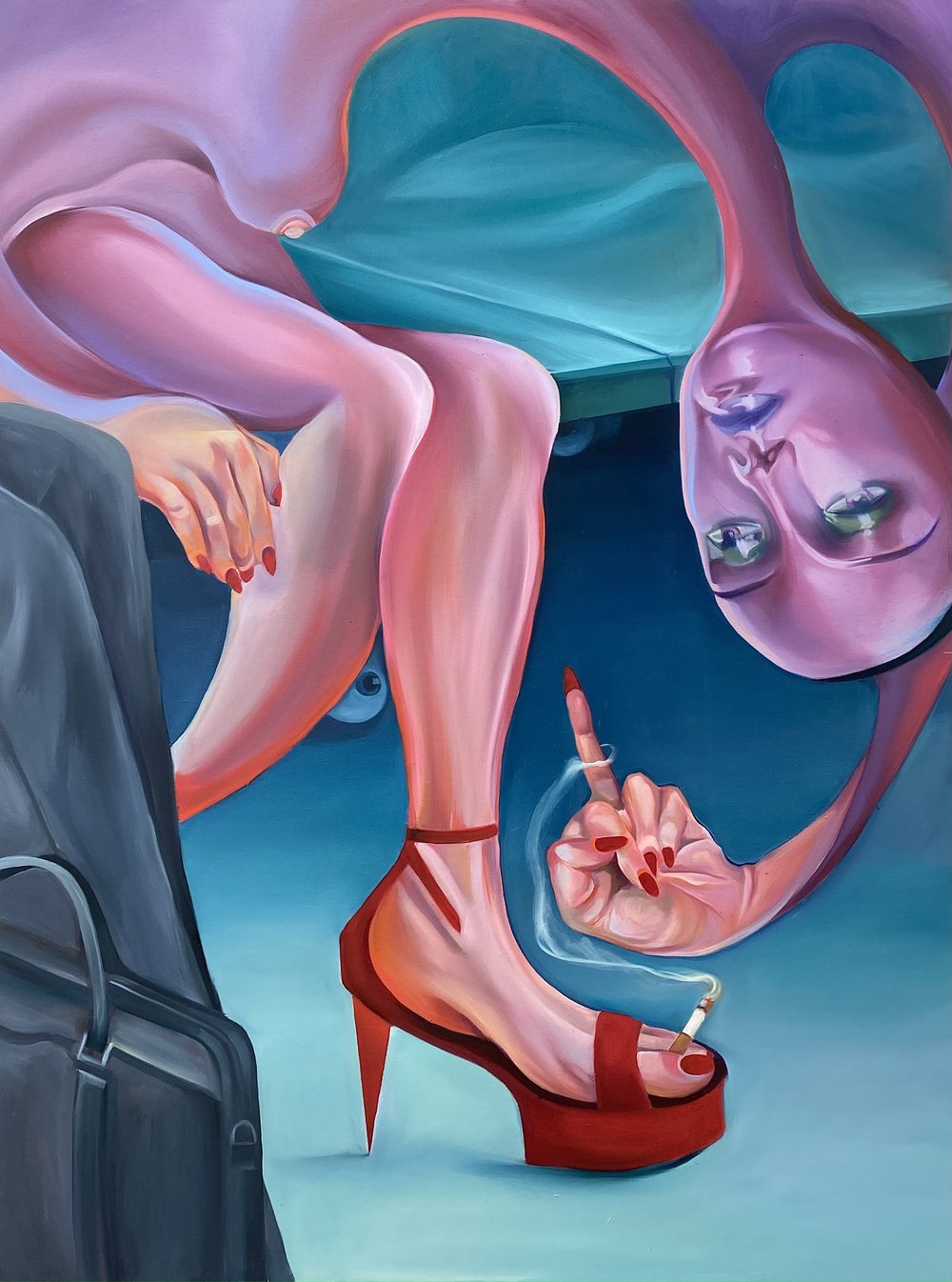 Alison Choy, Cuturi’s Gallery Manager, calls ‘For The Time Being’ a “breakthrough” for Liem. “Previously, her works outlined observations from daily events to media contents surrounding her. They suggest and references shared lived experiences,” Choy says. For ‘The Time Being’, she presents nothing short of surreal and raw emotions, particularly hers, uncovering and honouring her vulnerability in the eyes of the public. “This show —she’s putting herself out there.” Choy points out that ‘I Cried Bizarre’ which showed only 5 works can be seen as a preview to the 14 works in ‘For the Time Being’ which explore the themes more deeply. 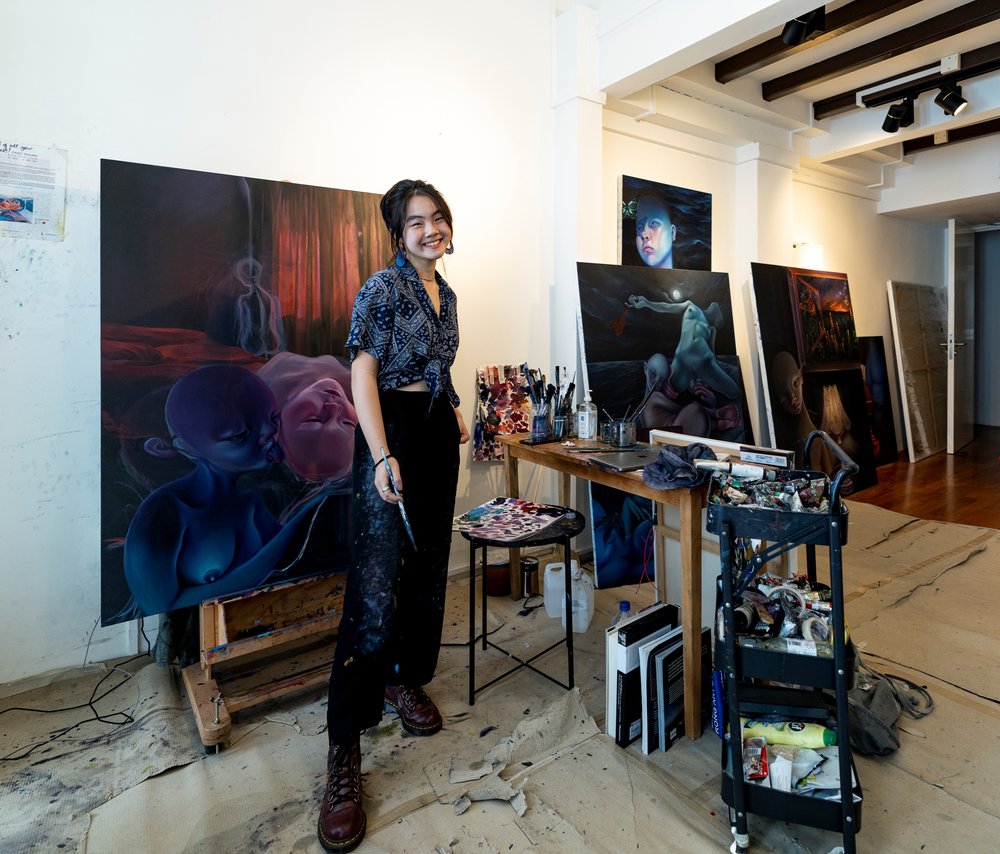 Liem herself says that she thinks this solo show is more genuine than the last. “[‘I Cried Bizarre’] was really about what I saw around me, and about other people. For this, I wanted a title that was simple,” she says. “A lot of it is just… me right now.” Painted over the course of an eight-month residency at Cuturi Gallery, she sought to make paintings that showed how people felt rather than how they looked. 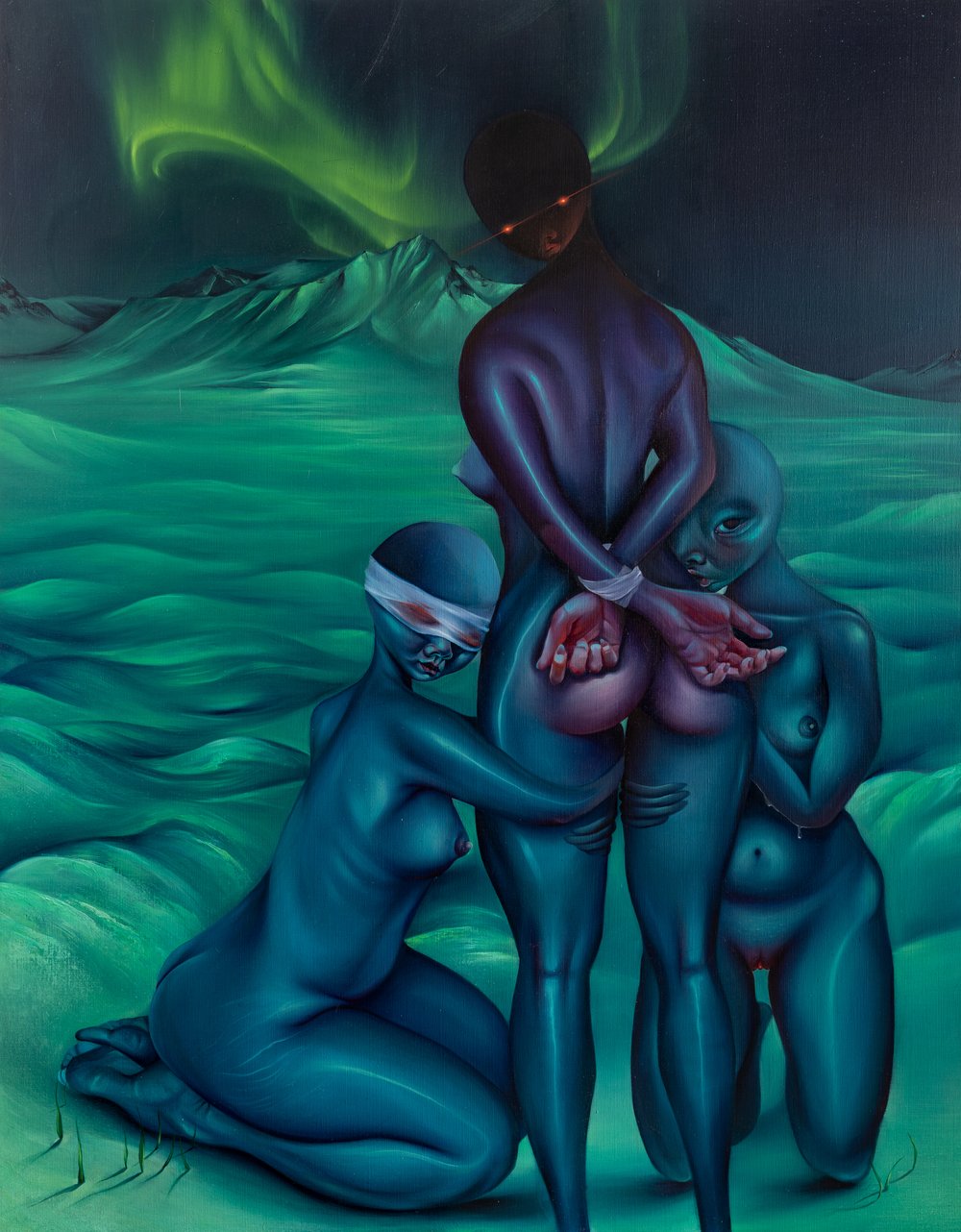 As she walks me through paintings, she points out details with disarming candour. Liem explained that ‘Arrival’ (2022) is about vengeful aliens coming to dominate a new landscape. “They’ve suffered and they’re in pain and they’re scared,” she shares, incongruously cheerful. “But they’re trying to exist.” A horn-shaped aurora borealis crowns the tallest figure, who turns over its shoulder to glare at the audience with red laser eyes, perfectly manicured hands bound behind its back. Its skin gleams pink and blue like neon lights reflected by black waters.

It is not this figure’s gaze which stands out for me, though. Instead, it is the gaze of a kneeling figure on its right, whose hands have threaded themselves through the gap between the tallest figure’s thighs. Liem has rendered its hands almost two-dimensional, as if ironed out flat onto the thigh in the moment of contact. The figure’s face is half-hidden, one eye almost challenging the viewer, the other obscured. Something drips down its elbow, drawing the eye to its bumpy, hairless crotch and a glowing pink vulva. 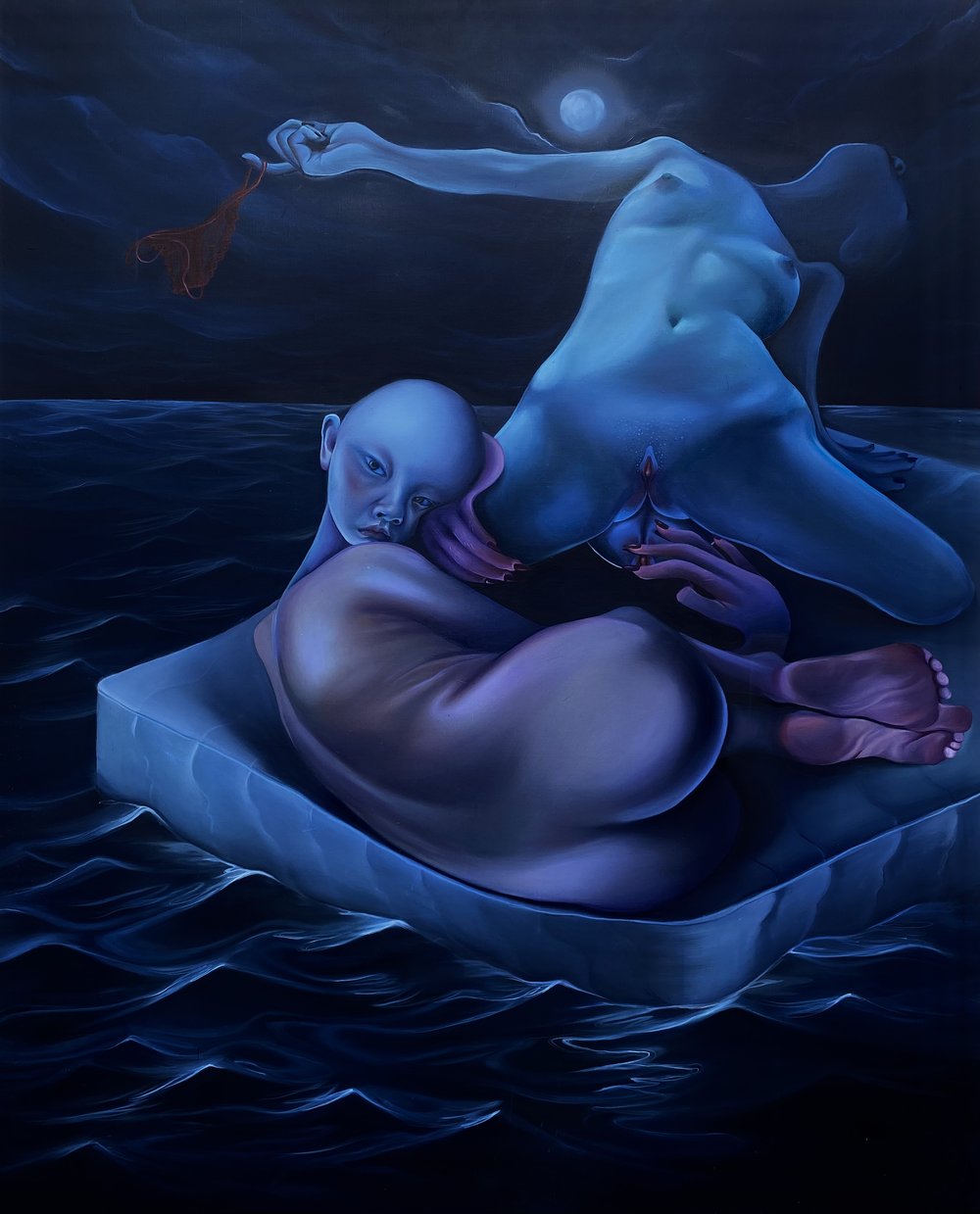 Deep red nail polish on manicured nails is the closest thing to clothing that any of her figures sport, in contrast to the precise makeup, pop-art wigs, and stiletto heels of ‘I Cried Bizarre’. In ‘I am Mine, in Your World’ (2021), moonlight pours down upon a mattress afloat at sea, illuminating a hypersexed, faceless figure, a red thong hooked on a crooked finger. Coiled around the body is another figure, over-large hands wrapped around the first’s thigh and genitals.

‘I am Mine, in Your World’ (2021) is about performing for the gaze of another. “Sexuality is a kind of escape too,” Liem says. “But nudity is so broad. It can be sex, or power, or weakness.” While she articulates that baldness, like nudity, is representative of a raw vulnerability, the figures sport waxing bumps and ingrown leg hairs, indicating a carefully constructed hairlessness. 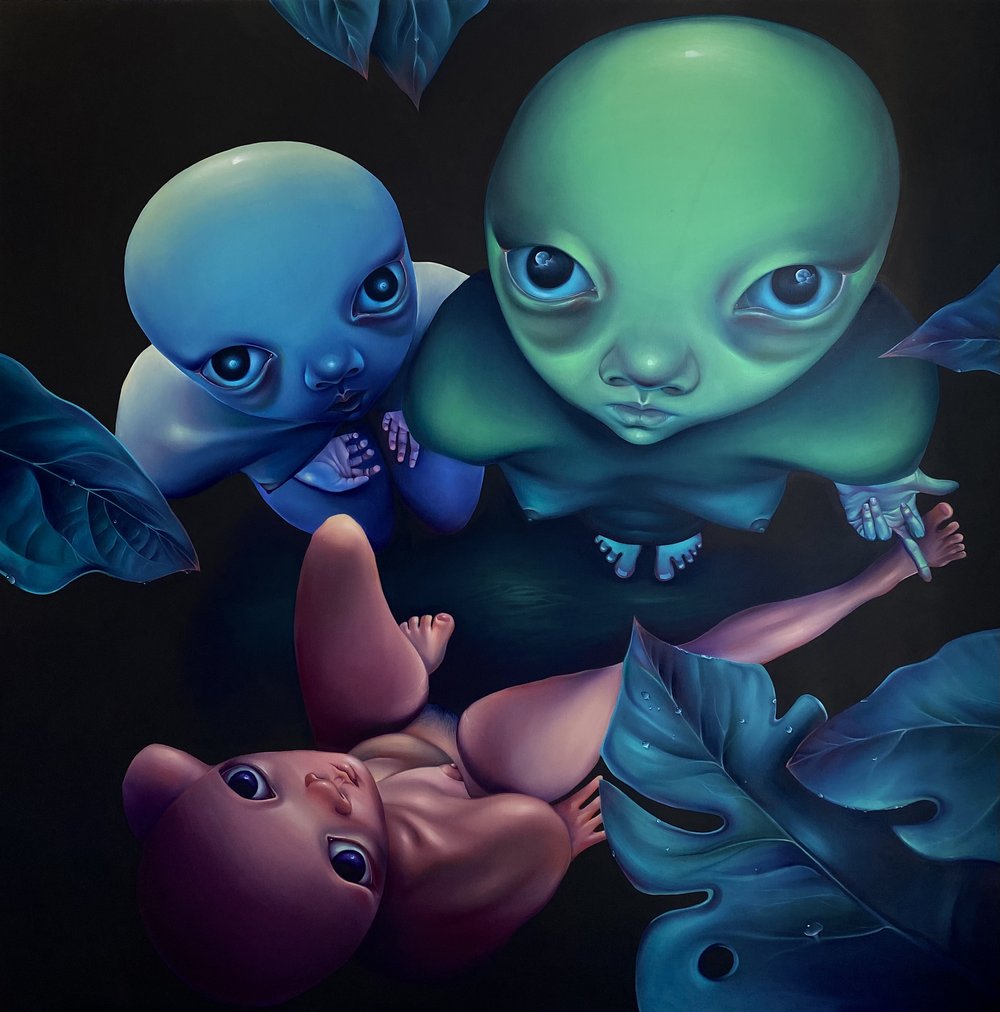 Besides ‘Arrival’ (2022), Liem’s figures hold dazed gazes. Or rather, they are held in a dazed, gleaming arrest. In ‘We Cannot Escape the Moon’ (2022), the largest painting of this exhibition, a disorienting perspective seemed to pin me in the gaze of three figures. That is, till I realised they were gazing beyond me, the moon reflected in their shining eyes.

Born in 2002, Liem is a young artist who is no stranger to the public eye. What does it mean for art to be “genuine” when the artist knows it will eventually go on show? What space for vulnerability can one carve out when one is always under scrutiny? Though these questions may seem more aligned with her previous solo show, which explored the performativity of online identities, ‘For The Time Being’ offers another entry point into the same conversation. Unlike ‘I Cried Bizarre’, which was mainly set in interior spaces, these compositions make use of foliage, celestial bodies, and wide, open vistas. The resulting effect is a fascinating contrast between the impenetrable interiority of the figures and the exposed outdoor settings they inhabit. 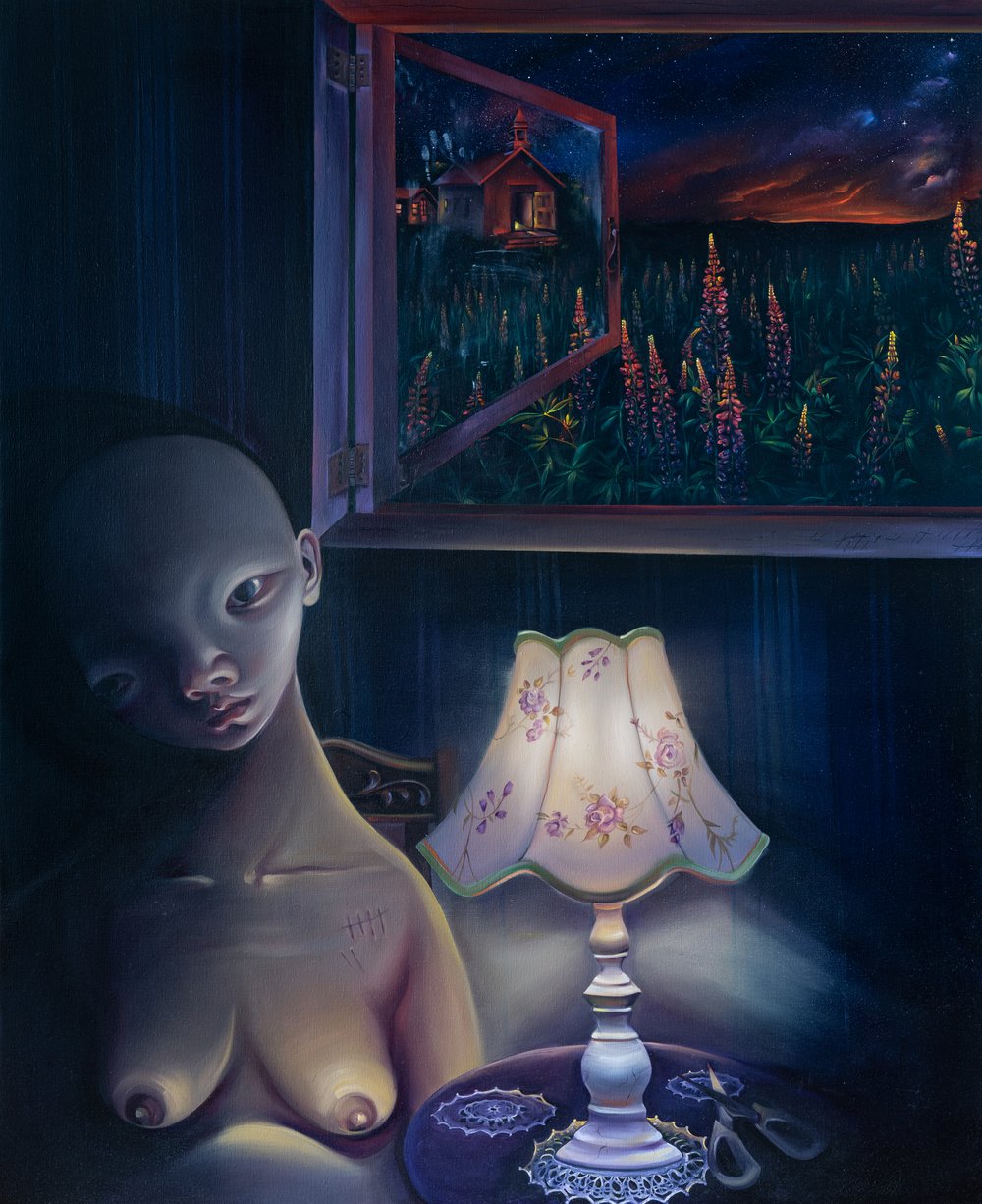 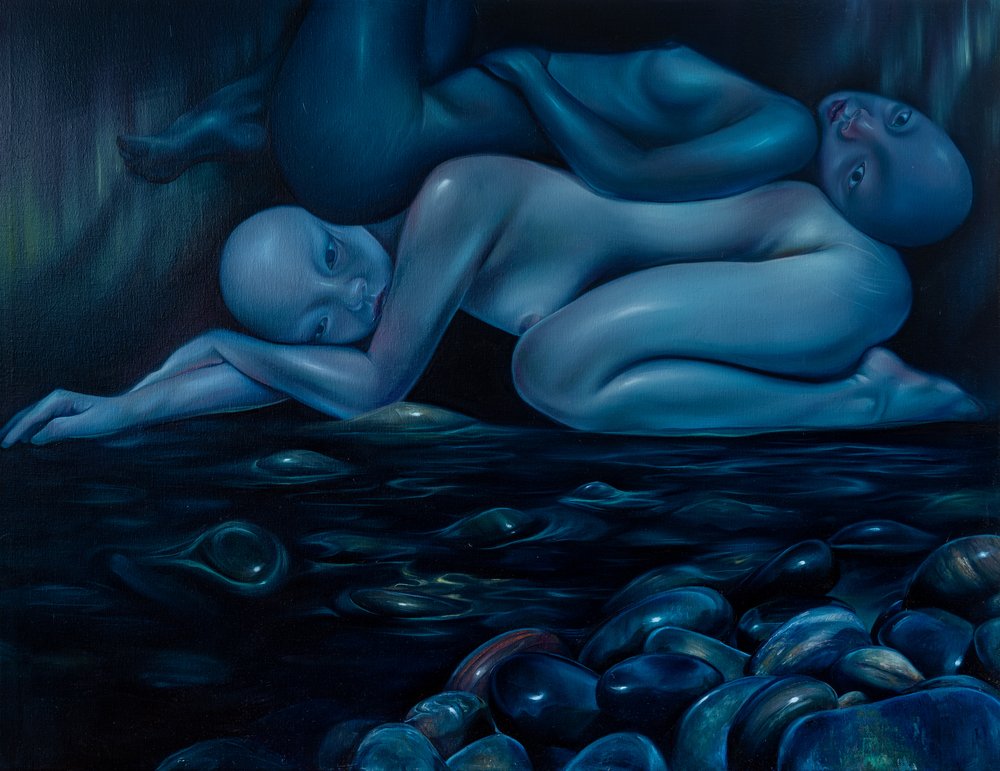 For Liem, the moon represents life, time. In ‘Black Out Days’ (2022), a slumped, sallow figure is illuminated only by a bedside lamp. Though the window behind them opens to reveal a verdant garden and starry night sky, there is a sense that this moonless scene has stepped out of the flow of time. A similar mood permeates ‘Stay Still’ (2021) and ‘Pleasure Puppets’ (2021). With a tender fondness in her voice, Liem introduces the two paintings: “They’re like puzzle pieces.” Figures stack, intimately tessellate, juxtaposed against the polished sheen of pebbles in water. “They want to belong here forever. They don’t want to escape from this place, this surreal place that they’ve mentally escaped to.” Alien as they are, Liem’s graceful brushwork softens the paintings. If ‘I Cried Bizarre’ was an interrogation, ‘For The Time Being’ feels more like the beginning of a gentle, if disorienting conversation, the kind that meanders along through a sleepless night. 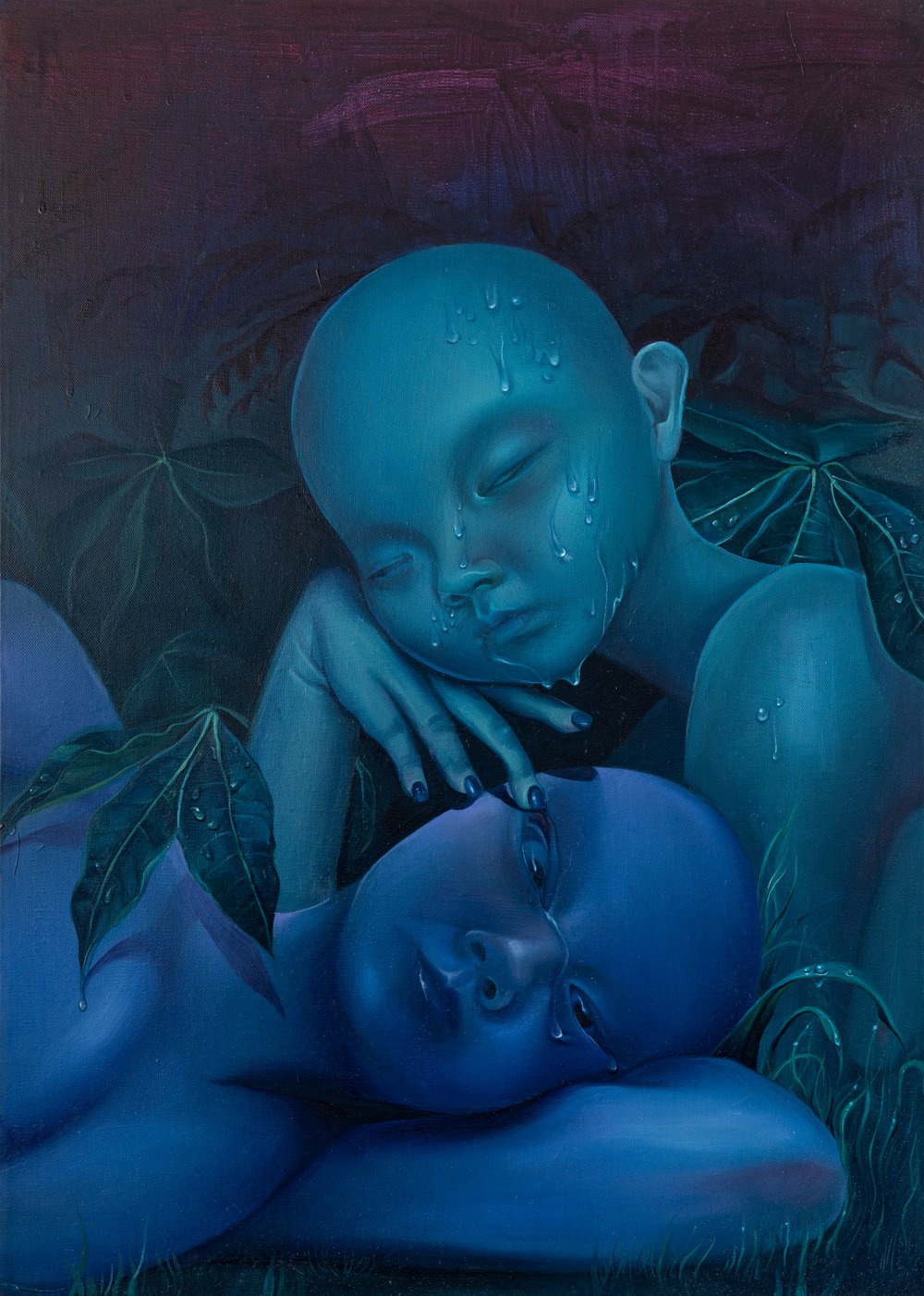 Liquids at rest tend to shrink into as small a surface area as possible. Surface tension. It’s why liquids can act like a stretched elastic membrane, able to resist external forces as long as the surface tension is not disrupted. Oozing and melting into the corners of their frames, the figures of ‘For The Time Being’ are characterised by a similar elasticity. In the bright, airy space of the gallery, they seem to resist the light.

Like a tear about to roll down a cheek, there is a viscous but precarious weight to ‘For The Time Being’. The figures gaze back, but not at you, just behind or beside you, making you wonder what strange force Liem has marshalled to keep them from seeping silently away. How they are held still in this glistening moment.